Loula Geater joins the cast as Spirit of the Ring, Jacob Morris plays The Genie, Joely Barbour as Princess Jasmine and Gary Davis as The Emperor.

Follow Aladdin, his brother Wishee Washee, and of course his mother Widow Twankey, on a spectacular adventure. Expect flying carpets, a wish-granting genie, an evil sorcerer and a lamp-full of laughs, so book your magic carpet ride to Malvern to the magical pantomime Aladdin! 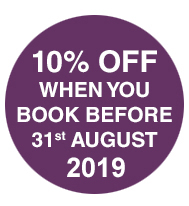 Relaxed performances are specifically designed for people who find regular performance settings challenging. We extend a warm welcome to people who feel overwhelmed by the ordinary performance environment. These relaxed performances are open to ANYONE who would benefit from a relaxed, non-judgemental atmosphere including (but not limited to) people living with dementia; people with an Autism Spectrum Condition; people with learning difficulties; people with sensory or communication difficulties; parents with young babies; and anyone who feels they would benefit from a more supportive and inclusive theatre-going experience. Relaxed performance: All seats £10.00 (Carers half price). Book via the Box Office: 01684 892277